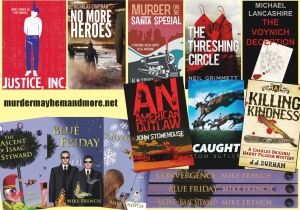 Here’s at MMM we applaud the accomplishments of indie authors and small publishers who brave the boundaries and experiment in areas where the big boys tend to play safe. So we’re delighted to introduce you to our hand-picked selection of superb new sci-fi / fantasy and crime-thriller novels which we’re giving away.

You could win ALL these books, from cosy crime investigations to gritty thrillers, supernatural sleuthing and futuristic sci-fi, worth £££ (or $$$ if you prefer!). Some of this week’s prizes are digital editions, others are traditional paperbacks and hardbacks. Some are so new they aren’t on sale yet (the winner may have to wait for a couple of the prizes to reach their publication dates!) All will whisk you away from mundane reality and into fictional worlds of intrigue and adventure…

Full details of the books below, but here’s how to enter the competition. To stand a chance of winning, you just have to do two simple things:-

That’s all! This week’s winner will be chosen at random from all those people who have shared this Freebie Friday photo. If you are the lucky winner, we’ll drop you a line to let you know (but it’s worth checking the MMM page on FB on 28th March 2014 any way).

JUSTICE INC by Dale Bridges: extraordinary short stories. Imagine a future where orphaned children are adopted by international corporations and forced into indentured servitude, where zombie viruses are spread through heterosexual intercourse, where Osama bin Laden is being cloned by the thousands for public execution. Welcome to the world of Justice, Inc. Stay awhile. After all, it’s your future too.

THE THRESHING CIRCLE by Neil Grimmett: a thriller set on Crete encompassing betrayal, vendetta, kidnap and a desperate quest into the hidden heart of the ancient island and culture.

A KILLING KINDNESS by JJ Durham: Pioneering detective Harry Pilgrim teams up with writer Charles Dickens to solve a series of grisly murders in Victorian London. When the only suspect is found murdered in his cell, the case turns into a deadly game of cat and mouse. But who is the cat, and who the mouse?

NO MORE HEROES by Nicholas Chapman: supernatural sleuthing in a city filled with characters from unpublished novels and unread stories. Jack Reynolds, a Hero, stumbles into a case of crooked lawmen and illegal magic which holds the fate of the city in the balance.

THE DANDELION TRILOGY by Mike French: the trilogy starts with literary surrealism at its most profound and then delves into futuristic fiction of the finest kind, combining dark humour with a vision of the future that inverts the classic dystopian nightmare. In this future, many live in fear of the Family Protection Agency which enforces the strict legislation that has been introduced to protect the family unit… Full review of Convergence, the final part of the trilogy, here.

MURDER ON THE SANTA SPECIAL by NM Scott: a traditional English country village whodunit for fans of Agatha Christie. A shocking murder in a quiet village galvanises the elderly but indomitable Miss Parrish. A Russian oligarch takes up residence and donates Stalin’s railway carriage to the local steam heritage railway — but it’s not long before there’s a dead body on the scene…

THE VOYNICH DECEPTION by Michael Lancashire: Secret codes, a turf war between rival gangs, a theft from a government building and a shadowy, offstage figure known as the Architect all collide in this thriller to keep you guessing to the end. Ben Jarvis has two weeks to do what the world’s top cryptologists have failed to do in a hundred years. Or his girlfriend will die…

CAUGHT by Tom Butler: a compelling thriller set in the murky underbelly of horse racing. Assault, arson and attempted murder set against the pounding pace of the National Hunt, with jump jockey pitted against race steward in what might turn out to be a fatal feud…

All these, up for grabs, for FREE. Hop over to Facebook, like/share the photo, and you could be this week’s winner!

Anyone can enter this competition but we’ll only send physical books to a UK postal address.

No cash alternative prizes are offered.

The winner will be selected at random from those who fulfil the entry criteria.