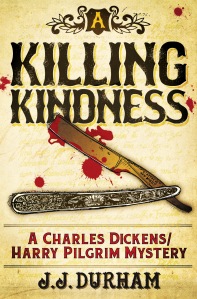 Historical crime fiction can be tricky to get right. It can be way too twee to be sufficiently scary. Or the story can be overwhelmed with factual accuracy at the expense of atmosphere and intrigue. So when I picked up ‘A Killing Kindness’ and realised that Charles Dickens was one of the investigators, I almost put it straight down again.

Just as well I didn’t. It turned out to be a ripping (pun intended) good read.

Author JJ Durham has created a convincingly unpleasant evocation of Dickensian London and populated it with intriguing central characters. Dickens himself isn’t the lynchpin of the investigation: no, that’s Harry Pilgrim, one of the capital’s first police detectives. And Harry has a serial killer on his hands – someone who takes great glee in sending bloody body parts from his victims to Scotland Yard, accompanied by enigmatic notes written in red ink…

Leaving aside the tip of the hat to the legend of the original Ripper, A Killing Kindness rapidly develops its own mythology and a satisfying narrative. The victims are far more varied than JTR’s fallen women, and it soon becomes apparent that there’s a method to the mayhem, if only the investigators could find it. This is a proper whodunnit with subtle clues seeded throughout, along with some sizeable red herrings too, for those readers who like to pit their wits against the author’s imagination.

As with all the best detectives, Harry brings with him a substantial back-story and no small amount of personal issues which are neatly interwoven into the murder-mystery plot. Dickens himself is more interesting than I expected; dabbling in do-gooding with his home for female waifs and strays, charming the upper class and intelligentsia, helping and occasionally hindering the investigation while fulfilling the role of the nineteenth century paparazzo.

Thankfully, the style of writing is modern and not ‘period’, so this book is easy to read and accessible without being stilted or feeling artificial. A couple of the minor characters come over a little bit like Dick Van Dyke – jellied eels, anyone? – and, at the other end of the spectrum, some of the dynamics feel a tiny bit too modern to be comfortably set in the mid-1800s. Inevitably, the police detectives are working to a deadline and must solve the case before the men from the ministry pull the plug; one of several familiar plot devices which serve to increase the pressure on the detectives but which hardly stretch the imagination.

However, the social commentary, inter-class tensions and relentless urban poverty of 1800’s London are all well represented and deftly handled. The murders are suitably gruesome; the mystery is undeniably intriguing. Harry Pilgrim’s past casts a long shadow over these proceedings and I’d certainly be happy to read another investigation with him at the helm.

Recommended for readers who enjoy the Brother Cadfael or Matthew Shardlake series.

A Killing Kindness is available at Amazon, as is The Mourning Brooch, a short story in the same series