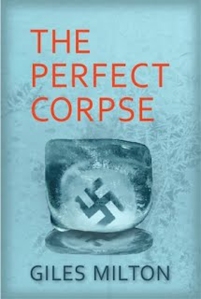 Part techno-thriller, part spy-story, The Perfect Corpse plunders three popular themes (digging bad things out of the ice; bringing bad things back from the dead, and uber-menacing Nazi stormtroopers) and blends them together in a thoroughly enjoyable and satisfying semi-historical, semi-speculative action-adventure romp.

Think Michael Crichton and Robert Harris (or Philip Kerr’s excursions away from the world of Bernie Gunther) and you’ll be in the right ballpark. Iceberg. Whatever.

In the Perfect Corpse, author Giles Milton makes the switch from his usual non-fiction historical writing to create an entertaining narrative, playing to the crowd by unleashing a ruthless Totenkopf killer on the unsuspecting American population of Nowheresville, FA. Unsurprisingly, the factual background – which includes details of the chilling eugenics breeding programme, Lebensborn – are solidly presented and feel entirely credible. The nice surprise is that the writing isn’t stodgy or lecturing, but instead the narrative flows without too many bumps in the road, swapping seamlessly from historical investigation to present-day peril.

The investigating protagonist, Jack Raven, makes for a sympathetic and engaging leading man. He’s a forensic anthropologist who is used to unravelling archaeological mysteries and is called in to investigate an unusually well preserved body that’s hauled out from the ice. Initially unwelcomed by the shady corporate types at the cryogenic company which is experimenting on the frozen corpse, Raven soon becomes their go-to guy as an SS soldier comes back from the dead, intent on fulfilling his final, lethal mission. It’s hokum, but damn it’s fun.

The supporting American characters are a little less successful in my view; there’s a bit too much boardroom bickering and a fairly limp female lynchpin who draws Raven into the investigation, then squawks and flaps at appropriate points in the plot. More interesting is Raven’s old girlfriend who does the legwork of the investigation in Europe, painstakingly drawing together the threads of the Nazi programmes which set everything in motion 70 years earlier. The scenes with her and the elderly German grandma are particularly successful in evoking both sympathy and horrified shivers.

The book’s finale is suitably satisfying, and I really appreciated the back-in-time epilogue which explains some of the hanging plot threads that had me scratching my head. Similarly, I was delighted by the D-Day weather forecast sub-plot, and the possibility that a lone American meteorologist might have foiled a Nazi counter-offensive during the last moments of his tortured life.

It’s not world-class literature, but it’s a damn sight better than the last Dan Brown book I mistakenly read. I hope Giles Milton will keep writing this kind of historical crime fiction: I for one will keep reading it.