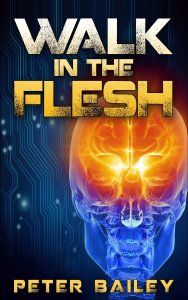 Heads up: Despite its title, and Amazon’s tendency to classify this book in the ‘horror’ category, this is not a zombie romp. Far from it. This is a near-future action thriller with a high-tech twist and an equally high body count. It introduces a near-invincible uploadable assassin who can jettison his meatware once a kill has been completed.

Sound familiar? It was a great concept when Richard Morgan brought it to life as Takeshi Kovaks in the Altered Carbon series, and it’s no less intriguing in this iteration. Author Peter Bailey’s writing may not be as polished as that of Richard Morgan, but the narrative possesses a raw immediacy and descriptive heft which snags you by the short and curly synapses with every no-holds-barred, blood and crunch fight sequence.

In the same way that citizens of Iain Banks’ Culture could gland a little ‘calm’ or ‘serenity’ to zone themselves out, so Peter Bailey’s future-soldier can ramp up his reflexes and tone down his pain receptors, causing maximum impact before grabbing a Wi-Fi ride back to base. Unlike Kovaks, this super-soldier isn’t entirely the full ticket, however. In fact, he’s the poster boy for PTSD on speed. He enjoys the increasingly intense acts of violence just a touch too much for the comfort of his UK government handlers…

Set a few years from now in an entirely plausible world where a dirty bomb has scarred central London, Walk In The Flesh wastes no time with lengthy exposition or  irrelevant information. It hits the ground running, mid fire-fight, and the pace barely lets up through each encounter. Yet each scenario is fully realised, adeptly described with economic clarity – no need for acres of back history and exposition.

Equally, the author deftly switches perspective without breaking stride to a very different character, a female academic in Iran. She’s about to be stripped of her professional credentials and indeed her human rights, to be reduced to the status of chattel along with the rest of her gender as the country regresses by several centuries and fundamentalists – literally – wield the whip hand. Bailey convincingly creates two entirely different, fully fleshed-out personae, and then throws them together in an unravelling situation where the killer’s fragmenting personality and brutal methodology mean the outcome is entirely uncertain.

There’s a less compelling subplot which seems to serve little purpose other than to break up the action sequences. It felt clumsy compared to the set pieces and main plot, and only offered passing distraction in the shape of some nyah-nyah-nyah smarmy establishment do-badders from central casting. The story didn’t need this behind-the-scenes intrigue, not when the main characters, taut delivery and atmospheric writing more than sustained engrossed attention.

Bailey brings the backstreets of the Middle East to vibrant life in a few lines. He catapults the reader into each new body that his nanotech killer inhabits, and he successfully describes the squeamish churn of a woman’s stomach when she’s undressed by every male eye and helpless to stop it… The final pages of Walk In The Flesh couldn’t have been better. He’s definitely got my attention. I’ll be looking out for the next book.