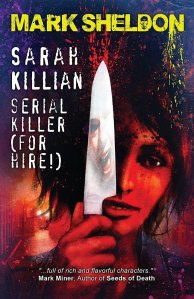 PSKs are professional serial killers. Not assassins (don’t let Sarah hear you describe her that way). They’re bona fide proven sociopathic mass murderers of the very worst kind: the ones who don’t get caught. Instead they’re tracked down by an ultra-secret agency, given clean IDs, makeover surgery to suit each assignment, and sent into the field as the weapon of absolutely last resort. When no other solution will do: kill ’em all and let porcupine sort them out. (‘Porcupine’ is Sarah’s signature cuss, and it kinda grows on you).

Mark Sheldon writes snappy, accessible copy which bristles with witty in-jokes, pop culture and clever acronyms. He’s created a brilliantly bad protagonist in sassy Sarah, a foul-mouthed misanthrope who packs a bad-ass attitude and the killing skills to back it up. She also has a penchant for shredding soft toys in airport restrooms, just in case you should ever discover a brutally dismembered teddy bear in JFK and wonder WTF has happened…

For all its risqué premise, SK is pretty ‘clean’ and not especially shocking. It leans more towards frisky chick-lit than gore-drenched horror or explicit noir. Think Bridget Jones with the odd dead body, or the tone and tempo of the Kingsman movie. SK is a romp which takes Sarah to a high school where she’s partnered with another PSK in a traditional mismatched buddy set-up. Together they must fake a teenage rampage to prevent an actual massacre taking place. It’s a nifty plot, and the whole PSK conceit is extremely entertaining, especially with Sarah’s constant sardonic commentary on all aspects of her undercover life.

It’s a rapid read, and by the time you hit the end of SK it’ll be entirely obvious that this is only the establishing chapter in an ongoing series. It introduces a snarky character with hints of extreme darkness hidden in her backstory, as well as a genuinely inventive scenario for her to exercise her anti-social talents. I felt that the central story of this book could’ve done with a bit more substance to make it more of a satisfying standalone read – it wraps up outstanding business without much wallop and then tails off, leaving all the interesting threads hanging for a future episode.

A promising start, however.