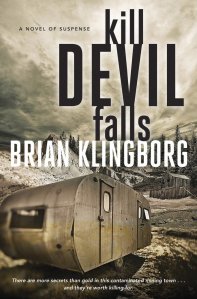 Kill Devil Falls isn’t somewhere you’d want to end up stranded. A ruined wreck of rust belt Americana in the Sierra Nevada region, it has no main road. No mains power. No cellphone signal. It has an incompetent, possibly corrupt local police force. It has a single criminal incarcerated in its ramshackle jailhouse. It has many more freaks, weirdos, oddballs and outcasts crawling around its dilapidated old houses and decaying trailers.

The life went out of Kill Devil Falls years ago, when the mining stopped, when its water supply was contaminated and the sink holes started swallowing up the real estate. Kill Devil Falls is a hellhole, a ghost town, and only the faintest embers of its soul are still flickering.

Into this situation strides US Marshall Helen, come to transport white-trash Rita from the jailhouse to county court after Rita and her beau ripped up the road in a series of highway robberies. Somehow Rita got herself tagged while skulking around Kill Devil Falls. But before Helen can cuff her securely in the back seat of the prowler and head back down the snowy mountains, her car’s incapacitated – and then people start dying. Helen’s on her own against unknown perp/s who want to steal Rita’s swag and keep their own sordid secrets securely under wraps…

In no time flat, KDF becomes a die-by-the-numbers hunt-n-hide. Peripheral characters come and go in grisly cameos. Author Klingborg plays it smart with his in-bred backwoods cast of creeps, so you’re never quite sure who might be a real deviant psycho killer, and who’s just opportunistic scum with an eye on the main chance (or Helen’s ass. Or both). They’re all equally threatening.

Helen herself doesn’t get much in the way of character development; think Scully in one of the later X-Files episodes when she’s isolated in hillbilly country. Helen’s role is to run away, fight back, be plucky, make some dumb moves and uncover the true evil in the town.

Kill Devil Falls relies on breathless continual motion to maintain its momentum and sense of tension. It’s not one of those dark, brooding backwoods noir novels which oozes nerve-shredding atmosphere. There are some gruesome moments, and some well-choreographed action sequences, but we’re a long way from Clarice Starling and psychological thrillers of that ilk.

A fast-paced read, easy to get into but kinda like a grande cappuccino: mostly froth.

Kill Devil Falls by Brian Klingborg is published in April and is available to pre-order in various formats (but OMG have you seen the prices? £13.99 for a paperback? A tenner for an ebook? C’mon, get real)