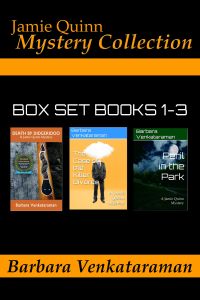 ‘I don’t know why I feel guilty, it’s not like I killed the guy. I didn’t even know him, but I heard he was a real bastard.’ So begins Death by Didgeridoo, the first in the Jamie Quinn mystery series, by Barbara Venkataraman. Read on to get a feel for the series, and then we’ll tell you how you could WIN all three novels in the series…

‘Let me put it this way, when word got out that Spike was dead, that he’d been murdered with one of his own musical instruments, celebrations broke out all over town. Some people toasted his demise with expensive champagne, while others clinked bottles of cold beer; it just depended on the neighbourhood. And while many stories were told that night – none of them complimentary, I assure you – there was a common theme: Spike was a liar and a cheat, a poor excuse for a man who’d steal from his own mother, if he knew where she was, or sleep with a friend’s wife, if he had a friend – which he did not. Spike’s only companion was his dog, Beast, a German shepherd that went everywhere he did, and wasn’t very friendly either.
‘You’re probably wondering how Spike had such a successful music store when he was such a major jerk. The answer is simple – he was a rock star. Literally. His drum solos were legendary. After The Screaming Zombies’ first album, Deathlock, went platinum in 1999 and Spike won drummer of the year, there seemed to be no stopping this garage band of high school dropouts. But Spike found a way. With his huge ego and flair for paranoia, he managed to piss off everyone in no time, including the band’s manager, agent, publicist, producer, all the way up to the head of the record label. The roadies especially despised him. They would set his drums up the wrong way or turn his speakers off whenever they could get away with it.
‘And let’s not forget the rest of The Screaming Zombies, Snake, Slasher and Slime, a/k/a Daryl, Marcus and Ricardo; they had a million reasons to hate Spike – most of them crisp and green, with pictures of dead presidents on them. They blamed him for the band’s implosion and spectacular crash to the bottom that left them as broke as when they started. People say it takes only ten minutes to get used to a luxury, but a lifetime to get over losing it. Lucky for the Zombies they were always stoned, so their memories of the good life were too hazy to be painful.
‘Fast-forward three weeks to the present where Spike, still dead of course, has somehow taken over my life, causing me to put my house on the line, my reputation at risk and my sanity over the edge. Well, let’s face it, I wasn’t all that stable to begin with, but still…
‘It’s hard to know where to start, but here goes. My name is Jamie Quinn.’

Wow! What an introduction. Leaves you wanting to read the rest, right? Well you can – and for free! We have five boxsets of the three Jamie Quinn mysteries to give away. Just hop over to Facebook and like / share / comment on the Jamie Quinn post (or if you don’t do Facebook, you can comment below). Here’s what you could win:

DEATH BY DIDGERIDOO: Reluctant lawyer Jamie Quinn, still reeling from the death of her mother, is pulled into a game of deception, jealousy, and vengeance when her cousin is wrongfully accused of murder. It’s up to Jamie to find the real murderer before it’s too late…

THE CASE OF THE KILLER DIVORCE: Jamie Quinn returns to her family law practice. It’s business as usual until a bitter divorce case turns into a murder investigation, and Jamie’s client becomes the prime suspect. When she can’t untangle truth from lies, Jamie enlists the help of her favourite private investigator to try to clear her client’s name. And she’s hoping that he can also help her find her long-lost father…

PERIL IN THE PARK: Someone is making life difficult for Jamie Quinn’s boyfriend, Kip Simons, the new director of Broward County parks. Was it the angry supervisor passed over for promotion? The disgruntled employee Kip recently fired? Or someone with a bigger axe to grind? If Jamie can’t figure it out soon, she may be looking for a new boyfriend because there’s a dead guy in the park and Kip has gone missing!

ABOUT THE AUTHOR
Award-winning author Barbara Venkataraman is an attorney and mediator who specialises in family law and debt collection. She is the author of the Jamie Quinn mysteries; Teatime with Mrs Grammar Person, The Fight for Magicallus, a children’s fantasy; a humorous short story entitled If You’d Just Listened to Me in the First Place; and two books of humorous essays which won the prestigious Indie Book of the Day award.
Coming soon: Jeopardy  in July – the next Jamie Quinn mystery.
Author blog
Amazon page
Goodreads page

SMALL PRINT: we have five boxsets of the three Jamie Quinn mysteries to give away. Just hop over to Facebook and like / share / comment on the Jamie Quinn post (or if you don’t do Facebook, you can comment below).
Competition open worldwide. Closing date for entries is midnight GMT Friday 24th February 2017. Winners will be selected at random from all entries. Prizes will be awarded as Amazon kindle download codes or mobi files. Runner-up prizes may be offered. No alternative prizes available

We discovered the Jamie Quinn series through the 2017 Mystery Thriller Week – a global event which celebrates the very best in all kinds of crime fiction.
Check what’s happening each day with the MTW calendar
Like the MTW Facebook page to see other updates

2 thoughts on “Giveaway! Mystery-thriller boxsets up for grabs”