In an extended moment of muppetry, I avoided reading Gunnar Staalesen’s Varg Veum series for decades. Every time a new episode featuring the Norwegian private detective arrived, my vision was averted. I looked the other way, put off by back-cover blurbs which compared the books to Henning Mankell, Maj Sjöwall and Per Wahlöö. That old fashioned form of Scandi crime is not my fave. I prefer stormy Nordic noir with a side-dish of midnight-sun melancholy.

Then there’s the cover of last year’s release, Where Roses Never Die. The art depicts a wee girlie, in sinister half-shadow, and the synopsis is all about a missing three-year old. At first glance you might mistake it for one of the domestic dramas which are oh-so de rigueur right now. I try to avoid these because there’s only so much mid-life, middle-class crisis I can cope with – unreliable narrators and paranoid neurotics have pretty much lost their appeal.

Happily – for me – the hour of the wolf was at hand. Someone gave me a copy of We Shall Inherit The Wind, the 2015 publication, and the scales fell from my eyes. I’m converted. And with all the passion of an evangelist who’s suddenly seen the light, I must now mither you into picking up Varg Veum, too.

Why? Because the storytelling is superb. Because of the sense of place – Bergen, Norway’s famous Hanseatic trading town – so perfectly evoked. Because of the love of language which shines through, even in translation. Because of the occasionally bleak observations, liberally distributed throughout each chapter; throwaway one-liners which come close to nailing the human condition in a single sentence.

Try this:
‘The coffee looked black and bitter, like a poisoned chalice from the beyond served by a brimstone preacher on the first Sunday of a fast.’

Or this:
‘I felt a shudder go through me, like frost. And I knew what it was. I had experienced it before. The frost was the incomprehensible, the coldness of a foreshortened life.’ 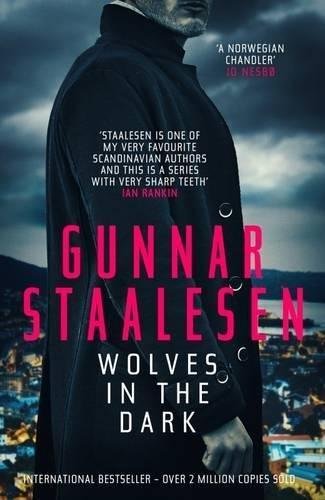 Why should you try Varg Veum? Because of the convincing plots, which neither escalate into implausibility nor bog down in tedious detail. Because of the emotional impact, conveyed through the protagonist, Varg Veum.

That name, by the way, is a cunning play on words itself. Varg means ‘wolf’ – and it can be used to mean ‘felon’. The phrase ‘varg i veum’ translates to ‘a wolf in the sanctuary’; a criminal in a holy place. A lone wolf; on a righteous mission but far from untainted.

And that definitely sums up the two Varg Veum stories I’ve read thus far – acts of violence, sometimes savage; sometimes tragic, given philosophical context by the protagonist’s efforts to deliver justice. Veum has a background in social care, which provides the moral centre for his investigations. He has a wry sense of humour, frequently self-deprecatory, which gives the series its solid heart. And he’s as flawed as any hard-boiled American gumshoe, frequently seeking solace in alcoholic oblivion.

It might seem to be the ultimate cliché, the spirit-soaked PI, and Veum does indeed drink to escape the consequences of his actions and the crimes he investigates. His relationship with aquavit is a complex one; his dry days are both diminished and desperate. This opens the door for some first class prose:

‘All I tasted was my most bitter defeat. The taste of sorrow and loss, and the eternal craving that only aquavit could assuage.’

‘I drank deeply, as though it was life I was imbibing – or death. Because you could hardly get closer.’

If this has convinced you to give Varg Veum a whirl then I’d suggest starting with the 2015 translation of We Shall Inherit The Wind. As the title suggests, it’s a clever combination of moral retribution visited upon those judged to be guilty and a modern-day tale of corporate corruption over the environmental impact of energy generation. It also starts a new cycle in Veum’s personal life, in the most monstrous manner imaginable.

Then you can move on to ‘Roses’, and the current publication, ‘Wolves In The Dark’ which will be my next read… and we can compare notes!
9/10
Reviewed by Rowena Hoseason

Find The Redemption of Charm at Amazon

One thought on “Varg Veum: a wolf comes a-calling”