Detective Sergeant Solomon Gray is haunted by a case he simply couldn’t solve. A missing kid: a devastated mother; a distraught father. A decade later later he’s called to an apparent suicide, the death of a 16 year old young man. A lad of the same age as the missing boy. The missing boy… who happens to be Gray’s own son.

So starts a new series of dark detective stories set in the backstreets of a seaside town on England’s south coast. In Dig Two Graves we meet Solomon Gray at his lowest ebb; an isolated individual, confronted with what might be any parent’s worst nightmare. Yet even in the depths of despair he still reaches out to make a heartfelt human connection. And he doesn’t shy away from the truth, no matter how personally painful it might be. Which raises quite a few questions – so we pinned down the author, Keith Nixon, and gave him a grilling…

DTG strikes a very different tone to your earlier Konstantin series, which probably has more in common with Preacher than with the traditional British police procedural. Why the change in style? Is this a deliberate move towards mainstream crime fiction?
My style tends towards the short and punchy narrative – having a character like Konstantin who hits people quite a lot does help! I’ve never deliberately tried to make moves to any particular genre – I started off in historical fiction – it’s more been a case of writing what I enjoy. Early reviewer feedback on DTG has sometimes said it isn’t a ‘typical’ police procedural, whatever that means!

Is this the direction your writing is likely to take in future? Or might we see more of the anarchic / acidic Konstantin and co?
Konstantin is just taking a bit of a rest, I love writing for him and he’s plenty more to say. I got a third of the way through a spin-off novel with protagonist David Brodie back in the hot seat (last time we met him was in I’m Dead Again). However, for now it’s all Gray. The second Gray novel, Burn The Evidence, is out in December and I’m contracted for a third which I’m currently writing. The timeline has been hectic so it’s been difficult to fit much else in.

Both DTG and the Konstantin series share a location where the stories are set – the seaside towns of Kent’s eastern coast. In DTG, they have all the appeal of an off-season Coney Island at 2am during a gangbanger convention. What did Margate ever do to offend you? Is it really as seedy, run-down and grim as you suggest? I note that you live at the opposite end of the country…
I love Margate! I’m in the North West now because of my job, however I lived and worked on the Isle of Thanet from 1997 – 2014. As a family we still go back regularly and have plenty of friends still in the area. I guess it’s based upon ‘write what you know’ and I personally feel Margate and its neighbours are a fantastic backdrop to crime – I don’t understand why the place isn’t used more in crime. It really is a mix of the old and the new, the rough and the ready.

Reading DTG, I was very much reminded of the atmosphere of the original 1970s Sweeney TV series. What were your inspirations and influences when writing Solomon Gray’s story?
I don’t know why but I’m always drawn to the gritty, rather than the glitzy, or the dark vs the pale. So the numerous books and comics I’ve read over the years will definitely have played their part, but it’s hard to point to any one in particular.

The phrase ‘Dig Two Graves’ supposedly comes from an Oriental proverb, and refers to the likely outcome for anyone seeking revenge. It’s a great title for a thriller. (We’ll overlook the awful schlock horror flick from a few years back). But while Solomon Gray is certainly seeking something, is it really revenge?
I picked it up from a newspaper article a year or so ago, in Gray’s case he has one full grave and one which is empty. Gray wants to know where his son is, he can’t move on from that anchor in time. So at the outset of DTG it’s about answers, rather than revenge.

And did ‘Solomon Gray #1’ have an alternative title at any time during its development?
I started DTG in 2008 for NaNoWriMo – 50k words in a month which I achieved, just. I played with the story for a while, then had the inspiration for The Fix (I wanted to kill my boss) so DTG ended up in the sock drawer. A couple of years ago I was between projects, went back to the drawer, pulled out the old manuscript and read it on a train. Inside was a mess, but I felt it had something to it. I subsequently spent the next two years fiddling with it on and off, getting people to take a look and adapting it accordingly. I’ve forgotten the original title but it’s been Devil’s Dust, The Kill Game and Between The Gravestones…

You’ve definitely given Gray a burden of biblical proportions. He’s the archetypal embittered copper carrying a double whammy of family tragedy so he’s hostile to his friends, combative with his co-workers; barely hanging on to his humanity. Then when things could scarcely get any worse… of course they get worse! Weren’t you a little bit concerned that you’d emptied the kitchen sink on him?
I know! The intention wasn’t there at first – damaged copper and all that, yawn – it just sort of happened. I’m incredibly lucky to have a fantastic wife and three (mainly) great kids. If anything ever happened to any one of them I don’t know how I’d get up in the morning for the rest of my life. Really, that’s the weight around his neck. And I’ve always been fascinated by how massive events are really the culmination of several smaller, almost inconsequential mistakes – Gray is where he is now because he made one, stupid decision.

As well as a cracking murder mystery, you also touch on many social issues in DTG. One of them has been in the news recently, about whether the police should accept assistance from vigilante paedophile hunters. Obviously, you wrote about it long before the story surfaced in the news a few weeks ago. How do you feel about child protection officers working with groups like ‘Dark Justice’?
I loathe any negative news about children, innocents being affected for the rest of their lives by adults who should and do know better is terrible. Broadly, I don’t have a problem with the police working with as many resources as they can to catch these people, provided the vigilante groups don’t take the law into their own hands. The police are stretched, if someone else can fill the gap and catch people and protect kids, then that’s great.

A couple of the supporting characters in DTG really stand out as well-developed, interesting people. Is there any chance that the slightly sinister (and brilliantly named) Pennance, or Yvonne Hamson might see some action in adventures of their own?
That’s a great question and not something I’d considered until now because I’m just so focused on getting the series onto paper. When Gray reaches the end of his story arc I have to decide where he goes next. Can he? I don’t know yet. Considering I try to have even a small connection between all my crime novels with recurring characters it’s not unreasonable to think one or both could do so. Of the two, Pennance is probably the most likely (though it would mean him moving from London to Margate!)

A couple of years back, you wrote about DI Charlotte Granger in The Corpse Role. Which do you prefer writing – male or female protagonists?
My wife is one of the strongest people I’ve ever met so I’m drawn to tough females. I’ve two daughters I’m trying to raise in a no-nonsense fashion as. In terms of characters I also have Fidelity Brown (Russian Roulette) who takes crap from no-one. That’s what I try and tell my girls, they’re as good as anyone, male or female and that tends to come out in my stories. So on balance it has to be strong female protagonists.

Thanks for your time and insights, Keith. And for weaving such an intriguing story! 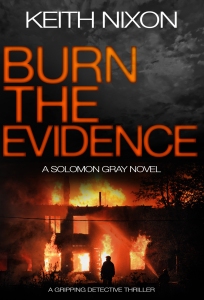