Here at MMM, the last twelve months have been crammed with mystery and intrigue, betrayal and revenge, bitterness and redemption – and some simply stunning plot twists. We’ve read and reviewed almost a hundred different crime titles across all aspects of the genre, from literary works of art by established grand-masters, to pulp fiction by debut indie authors.

We’ve recommended many riveting thrillers – but only a very select few, less than 10%, achieve a full-on five-star rating. Here, then, are our ‘six of the best’ from the world of international crime fiction; six ripping reads which scored 9/10 and came close to delivering the perfect payoff. They range from contemporary American thrillers to historical investigations, with a definite tilt towards the Scandinavian side of police procedurals and Nordic noir.
If you want to start 2018 in fine style then settle down with any of these – be prepared to be scared, seduced, saddened and surprised…

The Scarred Woman by Jussi Adler-Olsen
We’d missed a few of the Department Q cold-case investigations, but this proved to be a great place to pick up the threads. The standalone narrative is the central focus of the book – and what an enthralling story it is, full of social observation and truly credible middle-class murderer. Expertly incorporated into this compelling blend of deceit and dishonesty, there’s an older murder to be revealed: the death of a pitiless bully whose victim has struggled to hold onto her sanity ever since…

The Ashes Of Berlin by Luke McCallin
Set in the aftermath of WW2, this is a long, slow examination of the human spirit, not in the extreme heat of combat but during the relentless grind of grim existence in an unthinkable situation. The story encapsulates the cataclysm which all but destroyed German society and brought Europe to the brink of oblivion. It’s geopolitics at the intimate, human level, featuring spymasters, idealists, partisans, pragmatists and political animals of all stripes. Ideal if you enjoy Philip Kerr, Ben Pastor or Alan Furst.

Dark Pines by Will Dean
This is Nordic noir for everyman. It seizes the core concepts of Scandinavian crime fiction and amps them up with a quarter-million volts of electric energy. It perfectly captures the eerie atmosphere of small-town rural Sweden, and blends it with the page-turning pace of an American thriller. The female central character is by far the most credible iteration of the plucky heroine we’ve yet encountered: committed and capable, but also terrifyingly vulnerable. She’s a genuine, three-dimensional protagonist, one who demonstrates considerable grit without breaking the boundaries of the real world. Dark Pines will be a best-seller before you know it.

Chaos by DJ Schuette
Imagine a snake and a mongoose, circling each other with vicious, deadly intent. That’s the nub of this battle of wits between a sadistic killer and the FBI investigator hunting for him. It’s a white-knuckle page-turner which introduces a chilling psychopathic killer, a murderer warped and honed by his traumatic upbringing. The procedural attention to detail feels realistic: the gruesome crime scenes meticulously depicted. The author delights in wilful misdirection and subverting expectations, yet his plotting is consistent and coherent and his characters have credible depth. Unusually accomplished for an indie publication; ideal for fans of a certain Dr Lecter. 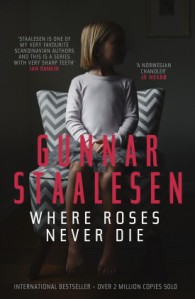 Where Roses Never Die by Gunnar Staalesen
The Varg Veum series of Scandi crime investigations brilliantly blend the best bits of hard-boiled pulp fiction and Norwegian noir. Veum himself is as flawed as any hard-boiled American gumshoe, frequently seeking solace in alcoholic oblivion. Yet he retains a bleakly bitter sense of humour, tossing out throwaway one-liners which come close to nailing the human condition in a single sentence. The plots are solid and the storytelling is superb, mixing twists and turns with socially-conscious existential angst.

A Climate Of Fear by Fred Vargas
A contemporary French investigation, but one which exists in a parallel universe to the gritty thrillers like The Bureau or Braquo. Instead the Commissaire Adamsberg series is almost the very definition of quirky. It’s the very highest quality Eurocrime, in which moral philosophy, human frailty and personal observation are interwoven with a genuinely perplexing mystery. A series of murders may (or may not) be connected to an historical society that celebrates the French revolution… or which may (or may not) be linked to unexplained deaths on an isolated Icelandic island. The result is a splendid juxtaposition of whimsy and tragedy.

Try THE CORRUPTION OF CHASTITY for just £1.99