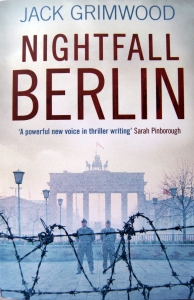 This is entirely a great read, and like all great reads, it works on several levels. You can read it simply as the continuing adventures of Major Tom Fox, Brit spook person,  carrying out a certainly secret and possibly dubious mission in East Germany. That dates it of course. East Berlin, to be more precise. And if you read the book as being no more than that – a thoroughly entertaining cold war spy romp – then hurrah! It’s very good.

But, being a great read, it’s a lot more than a comfortable, simple Spies R Us affair. It’s also jammed with commentary, deliciously non-judgemental, about where we Brits are today, where we are in Europe, because this is how we got here. And it takes no imagination at all to consider the relevance today of a story — and a cracking good story at that – set in the last cold war. Jack Grimwood looks at current problems through old eyes, demonstrating that nothing we’re concerned about today is new, how everything changes, and everything stays the same. The failure to learn from experience is not a modern development. It truly is a great read.

The plot seems simple enough. Our hero is despatched to East Berlin to bring home a defected defector, a Brit who spied for the Sovbloc and now wishes to return. Except… but that would spoil the story. And, as is the case whenever espionage is involved, the problems lie in working out who to trust, who is honest, and to figure out why they’re doing what they’re doing. A classic puzzle, cleverly and wittily told. And it is plain that the author knows Berlin, its geography and its ways, and how the East was set up, and how the West reacted to it.

There are too many memorable moments and compelling characters to list here. Read the book, work out what’s going on, get it wrong and repeat. This is a book which bears that repeated read, because the second read reveals the cleverness of the plotting and confirms the consistencies of the characters – some are more complex than they appear, while others are the opposite, and all points in between. Just like real life, whatever that is. There are winners and there are losers, there is tension and release; there may be romance too, but it is a curious romance, inevitably given the character of Major Tom Fox.

Nightfall Berlin is the second fictional appearance of Tom Fox, who surfaced in the author’s earlier work, Moskva. It’s customary at this point to suggest reading the first in the series first (you might still be in time to win a copy in our competition), but in this case reading the new book first then following it with the original will show you a lot more about Major Fox, who is not a simple person at all. Recommended.

Nightfall Berlin by Jack Grimwood is available at Amazon