Take a roadtrip with a US Marshall, travel back to Nazi Germany, explore the underbelly of the banking business in Switzerland, discover the strange side of Japanese noir, and meet one of Scandi crime’s finest detectives in his younger years. All this and more in these criminal escapades from international authors…

The Pyramid by Henning Mankell
The essence of small-town Scandi crime is distilled into this collection of five shorter Wallander stories, all set in the years before the full-length novels. These standalone mysteries almost act like a ‘secret origin’ series as the detective’s keynote characteristics become increasingly apparent in each episode.
Each of the stories showcases an intriguing investigation – they’re worth reading even if you’re not so familiar with Mankell’s typical mix of murder amid daily mundanity. In fact the shorter form places more emphasis on the plot than on interminable social concerns – which are a key concern for several Scandi crime authors but which can get a bit tiresome when they overshadow the story. In this collection, each mystery is satisfactorily balanced by insights into Wallander’s quirky personal life without getting bogged down.
Refreshing, and ideal to read in shorter sessions.
8/10

When The Dark Man Calls by Stuart M Kaminsky
A totally topical psych-thriller – an independent female survivor being stalked by the predator from her youth who brutally murdered her parents.
It’s so zeitgeist that you’d think it was written right now, but in fact it was first published back in 1983. Apart from the changes to technology, you’d never notice.
Great plotting, tight writing, a credible central character, stacks of twists and shocks, and a finale which keeps you on your toes until the final page.
8/10

The Butchers of Berlin by Chris Petit
A startling, stunning book. It takes some time to understand the author’s rather individual way of presenting his story, but it fair makes the eyes pop in places. It’s probably impossible to exaggerate the collective insanity of the middle and end years of the Second World War, the sheer mania of the Final Solution and the insurmountable absurdity of life in Berlin at that time. Petit handles it brilliantly.
It’s not like any of the other novels set in the same time slot, nor are there any heroes. And yes, it’s hard work in places. But it is an exceptional read.
9/10

The Fear Index by Robert Harris
The real-world consequences of cowboy banking practices may be truly terrifying (global economic meltdown: the end of civilisation as we know it), but it’s a tall order to turn hedge-fund trading into a gripping thriller. Inevitably, this is more an intellectual mystery than a pulse-pounding page-turner.
Genius billionaire algorithm-wrangler Alex might be paranoid, delusional, schizophrenic and suicidal, or he may be the instigator of a dodging-dealing financial conspiracy. Cue disorienting weird discoveries to ratchet up his bewilderment; enter the sinister stalker with cannibalistic tendencies.
The pacing is a tiny bit pedestrian at times; the mid-point murder is entirely superfluous, and none of the central characters are the least bit engaging. But the intrigue of hi-tech trading kept me hanging in there, and last couple of chapters made the effort worthwhile. Solid, if unsurprising.
7/10

Golden Prey by John Sandford
This is the 27th Lucas Davenport book, and the series takes a giant detour into unknown territory. The result is one of the better Prey books for years – with Davenport’s investigative abilities given free rein as a US Marshall. He genuinely gets to play the predator, tracking a pair of cold-blooded killers across the biggest canvas imaginable. The plot thickens with a cracking cast of bad guys who join the pursuit, scattering bloody mayhem in their trail.
All the comfortable cues are still here, including Sandford’s snappy dialogue and Davenport’s penchant for designer clothes and cars, but Golden Prey abandons all the tedious family, political and media sub-plots which used to hit my snooze button.
It’s a great place to start if you’ve not tried the Prey series before. There’s no mystery to solve – you ride along in company with the killers – but you’re never quite sure how this roadtrip’s going to resolve itself…
8/10 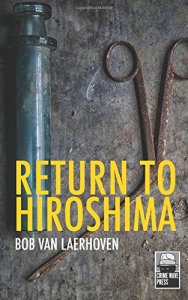 Return to Hiroshima by Bob Van Laerhoven
What a fine book. It should be almost impossible for a non-Japanese author to be able to convey the uniquely Japanese ways of thought, of presentation, of their views on history and of the unique Japanese perspective as the only nation to have suffered a nuclear attack. The author manages all of these things.
I was fascinated, intrigued and puzzled all the way through what is a fairly hefty read. Nothing is predictable. The puzzles are clear, their answers apparently transparent but in fact often opaque. No character is exactly what they seem, and the ways the characters present themselves are written with a seriously sure hand. The historical events behind the story are generously under-dramatized, and the level of detail is very high indeed. A great book.
9/10

This selection reviewed by Frank Westworth and Rowena Hoseason