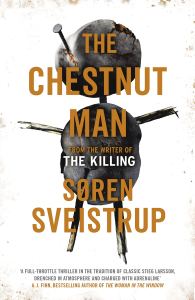 If a single book sums up the typical Nordic noir serial-killer-thriller then it’s this one. It sticks rigidly to the formula which has made Scandi crime so successful; grisly murders, political intrigue, multiple cliff-hangers, and investigative threads which appear entirely convincing in one chapter, only to be discarded in the next as another red herring leads the detectives astray.

The author, Søren Sveistrup, is better known for his work in TV. He’s the man behind the stunningly successful Forbrydelsen series – The Killing – featuring detective Sarah Lund. And the similarities with The Chestnut Man are inescapable…

There’s an undervalued female investigator; in this case a hardworking single mum who’s highly proficient and efficient, a dedicated stickler for detail. Her mismatched partner is that traditional washout male cop with a tragic personal history, an alcohol problem and a short fuse. He’s half a liability and half a hero, the guy who screws up at certain stages but provides those vital intuitive insights when the investigation stalls.

Inevitably, their boss wants rapid results to please the press pack, so he’s always happy to accept the straightforward solution presented by the bullheaded, ‘happy to beat a confession out of a suspect’ old-school members of the squad. And to please the people who adore domestic dramas, there’s the ‘heart-rending’ mystery of a missing child who may be dead, or maybe not…

The components of The Chestnut Man certainly steer close to cliché, but Sveistrup knows exactly which buttons to push. His experience in episodic TV pays dividends, so you’ve barely recovered from the last gruesome attack before the next victim starts being stalked. It’s a proper page-turner all right and, while the language can’t claim to be literary, the style doesn’t get between the reader and the ratcheting tension.

Apparently Sveistrup is a fan of the traditional whodunit, and if you enjoy solving the mystery yourself then you’re in with a chance. The story is littered with significant hints and suspicions, although it’s also entirely entertaining to just sit back and enjoy as the action unfolds. The murders themselves veer towards the nasty side of crime fiction, staying just shy of torture-porn but skating on thin ice all the same. There are definitely some scenes which might unsettle those of a delicate constitution.

The Chestnut Man delivers little in the way of originality, then, but it hits all the key notes of a ripping Nordic romp. It’s carefully constructed, perfectly paced and cleanly translated. Let’s hope that next time out the author breaks some boundaries with his characters and pushes the format beyond genre stereotypes. He’s certainly got the skill… if his publisher will take the chance.

Looking for quick thrills with a contract killer?

3 thoughts on “The Chestnut Man: The Killing continues…”