Our regular round-up of intriguing new releases features indie authors and big-name bestsellers. This time we’ve got gritty Britcrime, a new Nordic noir author and the best-known heroine in Scandi crime, an English mystery, a radical interpretation of domestic noir, an American psychopath and hardboiled pulp fiction – and a dark fantasy set in an alternate reality, just to keep you on your toes…

THE SILENT DEAD by Keith Nixon
The sixth DI Solomon Gray investigation starts with a gruesome discovery which brings to light an horrific secret, long since buried. After the death of a long-time foster carer, the tiny corpse of a new-born baby is found hidden in her home. Is this why she stopped caring for children after decades of fostering? Who is the child’s natural mother, and why was the baby abandoned?

Just as Gray starts to unravel dark family secrets and a conspiracy to exploit vulnerable young women, he’s forced to deal with vigilante action on his patch. Set against the atmospheric backdrop of an increasingly dilapidated English seaside town, this one comes recommended for fans of Ian Rankin, Stuart MacBride and Peter James.

THE LONG CALL by Ann Cleeves
The accomplished author of the Shetland mystery series turns her attention to the south-west of England and a brand-new cast of characters. Once again, the location plays a major role in influencing this opening episode, set on the North Devon coast (a tiny distance from where MMM is based, in fact!).

Detective Matthew Venn left the area long ago, turning his back on his family and the local evangelical community. Now he returns to take charge of his first major case, a body found on the beach. Finding the killer will force Venn back into the community he left behind, and the deadly secrets that lurk there. 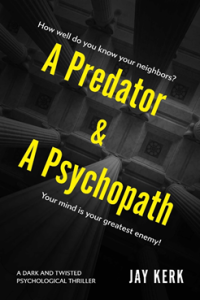 A PREDATOR AND A PSYCHOPATH by Jay Kerk
Raw, risky and intense, this explicit thriller explores some of society’s most disturbing aspects – from the perspective of a traumatised young man committed to psychiatric care. Jason can’t remember what happened to him, his wife or daughter – he can’t even be sure what’s real and what’s fantasy. Meanwhile, Jerry plays with people’s lives. He’s dangerously unpredictable, a narcissist on a divine and deadly mission.

Unpredictable and inventive, Predator comes with trigger warnings up the yazoo: not for the faint-hearted.

DEAD CAT BOUNCE by Robert White
An old lady dies and her legendary family fortune is never found. Enter Butchie Parmenter, who definitely doesn’t believe in legends. Experience has taught Butchie not to believe in anything except himself, so when good fortune unexpectedly lands at his feet he grabs the opportunity with both hands, determined not to let go. No matter what.

We adore this author’s acerbic style, his pace and plotting, his pithy commentary on the scurrilous side of life. No one writes a three-time loser quite like Robb White – so the misadventures of Butchie Parmenter promise plenty of hardboiled entertainment. Because when something looks too good to be true…

TIMBERWOLF by Dominic Adler
Take a turn into an alternate reality, a world similar to the one we live in, but different in important ways. This dark fantasy explores espionage and betrayal, love and war in a totalitarian state where loyalty to the Party determines survival. Axel Geist – rogue, ladies’ man and accidental political prisoner – is determined to survive. Even if it means selling his soul to the Old God Bassarus, Lord of Deceit and Duke of Hell…

…who sends Axel to enlist in the elite security service, the black-uniformed Timberwolves. Working deep inside the regime’s agency of oppression, Axel must play or be played, kill or be kill. And the fate of the nation rests on his treachery.

THE GIRL WHO LIVED TWICE by David Lagercrantz
Does the world really need yet another Lisbeth Salander story? Shouldn’t characters be allowed to fade away when their creators stop scribbling? Apparently not, as the Millennium trilogy now extends to six books. This time Mikael Blomkvist is being stalked, while Salander tracks her twin sister to Moscow. We’re promised old scores being settled, new outrages to be avenged and a ‘climax of shattering violence.’ And no doubt a film adaptation somewhere down the line…

THE COBALT SKY by Keith Dixon
The acerbic investigator Sam Dyke takes on an unusual case – an art theft – but soon finds himself embroiled in a murder mystery. A painting by one of England’s most famous artists goes missing and private eye Dyke is hired to track it down. He soon discovers that the loss of the watercolour isn’t the only misfortune to befall the artist, and more adversity lies in store…

Reported to be ‘the most enjoyable of the Sam Dyke crime novels to date… Dixon’s writing always sets such a high standard, drawing the reader into the midst of intriguing tales of mayhem committed by curious characters that are elaborated with an eye for detail.’

KULT by Stefan Malmström
Luke Bergmann is a reformed criminal still haunted by his violent past. He’s convinced that his best friend didn’t commit suicide and kill a child. When more bodies turn up, Luke is certain the same killer has struck again. His investigation reaches back through decades to his friend’s involvement with a sinister cult and dark secrets are exposed as Luke struggles to keep his own long-buried demons hidden away. When Luke finds himself in a killer’s sights, his search for the truth becomes the fight of his life.

Although this Scandi thriller is a work of fiction, it’s based on the real-life experiences of the author with scientology in his younger years. It’s recommended for all fans of Nordic noir and should suit readers of Jo Nesbø and Will Dean in particular.

IN THE ABSENCE OF MIRACLES by Michael J Malone
Childhood trauma, misplaced memories, parental abuse – we’re in danger of becoming immured to these appalling events by their current prevalence in crime fiction. Almost every plucky heroine we meet turns out to have been physically abused by her father / uncle / brother and so struggles through life, psychologically warped and emotionally damaged. These serious issues come close to being trivialised by their very ubiquity – especially as this situation lends itself to the ‘unreliable narrator’ trend which is so popular in ‘domestic noir’ right now.

Author MJM neatly sidesteps these concerns with a deceptively simple narrative device, one which gives this story genuine emotional integrity and raises it above the genre stereotypes. The action follows a seemingly normal family man who has to cope with a common problem. His mother has a stroke, goes into a nursing home, and he has to prepare the family home for sale. But what he finds hidden in dusty old boxes changes his whole perspective on his early life – and reveals a chilling mystery that affects every aspect of who he is today. A thought-provoking page-turner par excellence.