The clocks have just gone back so you have an extra hour in your day. What to do with that bonus free time? Try the new quick thriller

from Frank Westworth, a pithy mix of hardboiled humour and blunt force trauma. CzechM8 comes recommended for readers who enjoy Elmore Leonard, James Crumley, Lawrence Block and Stephen Leather – but don’t just take our word for it. Here’s what the early reviewers have said… 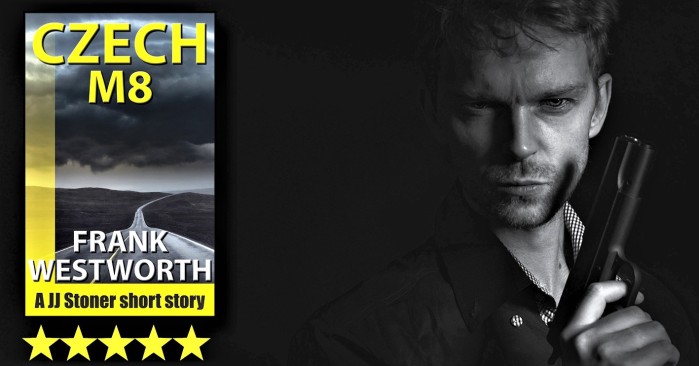 Frank Westworth is perhaps the master of writing cool prose. It’s laid back, casual but tense. This is Book 8 in the JJ Stoner series and once again there is more testosterone floating in the atmosphere than ought to be allowed! These stories are ‘for men’ who like their characters tough, rugged and ready for anything… but it is only women who can fully appreciate just how cool JJ Stoner really is.
As contract killers go, JJ has all the answers and you can’t help but admiring him – yes he’s tough, he’s dangerous whilst at the same time he respects and admires women in the way they want to be seen. Not that he’s against killing one if he contracts to or the need arises.
Featuring Harley-Davidsons and guitar jamming sessions; play it again Frank!
Pat McDonald

JJ Stoner is a guitar-playing, Harley Davidson-riding contract killer who works for the shadier side of the British secret service. When his boss asks him to head off to Russia on a mission, and a friend asks him to kill an African despot, Stoner’s world gets even murkier than usual.
This is a whip crack of a read. This vivid and violent short story is marvellously well- written. It’s choc-full of fast-action, dry humour, sharp twists and turns and well-drawn characters. Cracking stuff!
Paul D Brazill

This story is about style, and attitude. The style is Westworth’s blunt, violent and occasionally poetic use of language to create a dark atmosphere of testosterone-laden weltschmertz – that feeling of sadness we all feel from time to time when confronted with the world’s reality. Stoner’s reality is sharp edges, hard angles, brutal noise and violent death.
The other aspect of the story– attitude – is Westworth’s determination not to play nice, not to soften the brutal world in which his characters live. Their attitude is that we could all die tomorrow, so let’s live life until we die. This style, and this attitude, give CzechM8 a gut-crunching punch that some people may find hard to take – we want to keep breathing, after all – but the rest of us wind up invigorated and surprised and ready to go again. A great, visceral read.
Keith Dixon

The prose is elegant, often sinuous, and that ability adds an added edge to often incredibly violent scenarios. Plenty of authors do ‘gratutious’, and it is so much a laboured signature style for some, that shocking events seem blasé and trite – just another plot twist. However, Westworth’s use of language brings a deftness of touch that makes the often ghastly happenings within the story all the more visceral, appalling and utterly believable.
CzechM8 sees the welcome reappearance of the highly-painted, brother in bloody arms Shard, along with some familiar faces from other plotlines; their stories tucking, turning and burrowing around hints and scraps of backstory in other literary outings. That is not a disadvantage however, as each piece of JJ Stoner fiction is complete in itself and requires no prior acquaintance with any other works, other than to tempt you into acquiring the other stories which draw you in further to a very dark, very real world of sanctioned killings and their fallout.
Julieanna

Frank Westworth’s intelligent, muscular prose drives the narrative forward at a rate of knots; his writing being more nuanced and less generic than your average noir thriller. In the blink of an eye, Stoner is on a clandestine mission to the Czech Republic, vrooming around on a throaty Harley-Davidson and packing heat. Violence comes as natural to him as swimming does to a fish and it isn’t long before he is sending his targets to Hell with the minimum of fuss.
Westworth is a master at creating itinerant ex-forces loners who kill with impunity, but what I like is that there’s an engaging eloquence about Stoner which softens his armour-plated macho man demeanour and makes for an interesting read.
Kevin 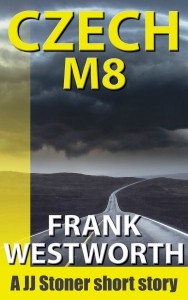 CzechM8 is a self-contained short story which features characters from the Killing Sisters crime-thriller novels and the Stoner stories. It fits in between Seven Hells and A Last Act Of Charity, but can be enjoyed as a stand-alone story without reading the other books. Go on… live dangerously!