If you’re seeking mystery and thrills then we’ve got a cracking selection of killer crime fiction for you. British detectives, fatal females; private eyes and serial killers; psychological page-turners and a spooky crime unit, from indie authors and bestselling big names. Here are the recent reads that we loved (and one we didn’t!)

ALTERED LIFE by Keith Dixon
Sam Dyke’s first outing is a belter, as we might say were we inhabiting the area of the UK where most of the action takes place. The author’s descriptions of the towns and countryside display his affection and knowledge of a fine part of the country.
Which has little to do with Sam Dyke or his first adventure in print. This is a PI story, set several years ago, and the reader needs to get their head around that, viewing from the modern connected age of instant internet. Keith Dixon has created a fine character: mostly calm, mostly focussed, mostly dispassionate … but only mostly. He’s offered a dull-sounding job and intends to turn it down, until the guy offering the job is murdered. And things gallop along from there, with plenty of colourful characters, car wrecks, romance and an engaging voyage of discovery — mostly about Sam, but also about the corporate world — until a traditionally bleak ending, high on a moor. Fine writing keeps the plot and the pace holding your attention, ready for the next revelation…
Recommended. Number Two comes next on my reading list.
Five Stars (FW)

CHILL OF FEAR by Kay Hooper
How has this series of 18 or 19 books stayed hidden from me for so long? It’s exactly up my street – a Special Crimes Unit of the FBI which is staffed by psychics, who investigate the oddest events across the USA. It deals with the matter of ‘enhanced senses’ in an entirely practical fashion – a matter of science to be discovered, not anything otherworldly.
The series is cleverly arranged in separate trilogies which focus on key characters from the SCU. I came in part-way through a trilogy with this book, but was so wrapped up in the scenario – a series of killings that span decades and directly affect one of the investigators – that it worked as a standalone. At times it veered a little bit too close to ‘romance’ and away from ‘thriller’, but the procedural aspects of the story were excellent. Enjoyable if fairly lightweight entertainment: I immediately bought three more in the series.
8/10 (RH)

THE REDEMPTION OF CHARM by Frank Westworth
This is the fourth book I’ve read by FrankW. This is probably the best so far. Gory, sexy, at times it is hard to follow the action… And then it becomes clear, heart-stoppingly so. An exciting read, definitely one I will read again in a year or two. Highly recommended.
Five stars (AS)

SPIRAL INTO DARKNESS by Joseph Lewis
Great title. Great cover art. Very confused book. It comes over as a curiously explicit young-adult domestic drama tacked on to a plot about a seemingly random serial killer. Spends more time exploring the confused sexuality of teenage boys than it does investigating the series of murders. It’s a bit like an X-rated version of The Brady Bunch with a homicidal maniac for added interest.
The plot is actually quite engaging, but it gets buried beneath a vast cast of characters and way too much adolescent angst. Might be more suitable for boys in their late teens than most other readers. It’s part of a series, but I wasn’t tempted to read the others.
6/10 (RH) 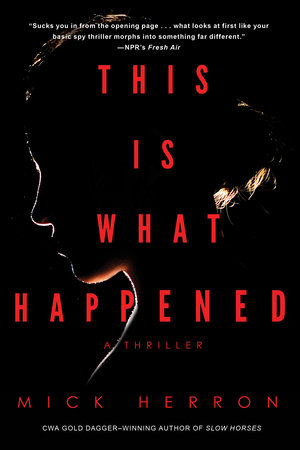 THIS IS WHAT HAPPENED by Mick Herron
My word, this is very clever. A slim book which crams a taut, tightly-knitted tale into not many pages. Herron is famous for his Slow Horses spook stories and at first you think this is what you might be reading… but this is an entirely different, a genuine standalone story. Herron eschews his more grandiose form of stunt writing to craft a sinister, haunting mystery of exploitation and abuse. Just when you think you’ve see the whole of the picture, a new chapter reveals that you’ve only been viewing one aspect from an obscure angle, and nasty things are hiding in the shadows.
A masterclass in the teasing reveal – a genuinely suspenseful psychological thriller. I have a suspicion that Herron read a ‘domestic noir’ novel with an unreliable protagonist, figured he could do better and… knocked that ball right outta the park.
9/10 (RH)

WHEN YOU RUN WITH WOLVES by Robert White
Every so often, I find myself sinking into a book and wondering two rare things: ‘how come I’ve not read this author before?’ and ‘how can I make the time to just read and read until it ends? Better yet, until I reach the end and discover that there’s a sequel?’ When You Run With Wolves is that rare event. And it is a truly outstanding read.
The plot is only a tiny part of the story. The true immersion comes when the reader slowly, scarily understands more of what’s going on. That in itself isn’t entirely unusual, what is unusual is my need to know How? and Why? and Where will it drag me next?
This is a dark book. very dark indeed in places. Self-preservation turns, slowly and inevitably, into self destruction — you’ll find yourself endless asking How will this guy get out of this? Because that’s how it works, right?
Wrong. The end is as dark as your imagination can stand. Great book. Entirely recommended. More please!
Five Stars (FW)

, the hardboiled hitman with a wicked sense of humour…