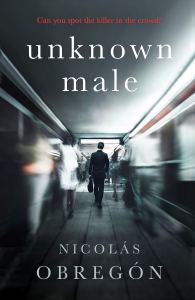 Japanese noir can be an acquired taste. It’s often stranger than the Scandi stuff: written in stylish prose that contrasts shattering acts of violence and fleeting images of bewildering beauty. It can be subtle to the point of obscurity yet explicit to extremes. This is not a genre for those who flinch easily, and unfamiliar readers might struggle with books like The Devotion of Suspect X or In The Miso Soup.

In Unknown Male, author Nicolás Obregón has crafted a rather more accessible story. His clever investigative tangle retains the hallmarks of its genre – an implacable killer, a genuinely perplexing mystery, complex characters motivated by conflicting experiences – but it’s not as outright bizarre as some Japanese fiction can be. Even so, this sophisticated story is definitely more challenging than the average police procedural.

This is the third book to feature the intellectually brilliant but psychologically scarred Inspector Iwata. He returns to his native Japan after years in America, somewhat out of step with his old colleagues and in an uncomfortably informal ‘consultant’ role. Iwata is a stranger in a strange land, not a welcome prodigal son. But he’s the perfect (…expendable) person to assign to a sensitive case which involves the death of a young English woman. The story which follows is as much about Iwata resolving his personal history as it is about catching a killer.

I read the first Iwata book (Blue Light Yokohama) a while back and missed the next one, so was somewhat behind with the character’s development. That wasn’t a problem: the story of Unknown Male is entirely self-contained. Obregón instils real depth in his characters with minimal exposition. He’s unleashed a genuinely ghastly killer, one who manipulates his victims with callous brutality but who passes unnoticed in the commuter throng. An anonymous salaryman, invisible in his dark suit and white shirt, an insidious stalker with a heart full of hate. The kinda of guy you meet every day at the water-cooler…

Balancing him, the investigators are rather more colourful and no less intense. A British police officer is sent to Tokyo as a liaison / observer, and she is a splendidly conflicted character in her own right. She’s sketched with a substantial back-story in a few deftly drawn paragraphs, and provides a familiar reference point for western readers to engage with an unfamiliar, occasionally unfathomable culture.

Even so, there are many moments of savage brutality, quiet poetry and oblique misery in Unknown Male. Don’t expect to be spoon-fed a straightforward story: much is understated or ambiguous… like that brilliant title, for instance.

Superb storytelling for the patient reader who enjoys the challenge of literary crime fiction. Not necessarily an easy ride!

Looking for slow-burn crime fiction with a literary twist?

Find THE REDEMPTION OF CHARM at Amazon