Strong female protagonists abound in this month’s selection of crime-thrillers – but gender balance is maintained by a couple of old-school alpha males and a truly unusual unreliable narrator. Read on for Scandi crime, wartime noir, gritty BritCrime and a psychological investigation from indie authors and big-name best-sellers… 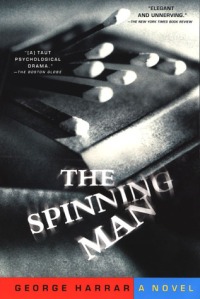 THE SPINNING MAN by George Harrar
An older interpretation of the unreliable narrator ‘psychological thriller’, this book was given new life by the film (which is excellent, BTW) starring Guy Pearce and Pierce Brosnan. The book is far more about philosophy, the nature of truth, fidelity and parenthood than the film, which is more of a murder-mystery. In written form, The Spinning Man is a self-indulgent exploration of the themes of Wittgenstein’s world view, and every single chapter pulls on a thread of accepted perception or the peculiar (often dishonest) niceties of social interactions. But the rambling philosophical investigations are skilfully balanced with the painful process of a major crimes police investigation – as seen by the prime suspect. It’s an unsettling insight into how a life can be monstrously disrupted by a single witness, a simple observation and a series of coincidences… which, of course, might not be coincidental at all.
Wordy, but thoroughly absorbing.
8/10 (RH)

SHAMUS DUST by Janet Roger
Take a hardboiled American private eye and transplant him into the bitter winter of post-WW2 England. Add corrupt cops, femmes fatale, devious politicians, scheming developers, damsels in distress — and centre it on a gritty gumshoe who knows how to take a beating but won’t stay down. Then anchor the action in a meticulously crafted City of London, in the shadows of the rats’ tangle of criss-cross backstreets and blind alleys, beneath the bombed-out buildings and ramshackle ruins. The city itself becomes a brooding, oppressive presence, in a story which echoes the old-school style of Raymond Chandler’s noir mixed with Philip Kerr’s war-torn cynicism.
Very much positioned at the ‘literary’ end of the spectrum. The author obviously loves language and complex plotting, and sometimes the story suffers from extended descriptions and an over-abundance of genre-staple characters. An immersive, meandering read, one which demands plenty of patience and your full attention.
7/10 (RH)

FLINT’S CODE by Paul Eddy
Grace Flint’s ‘code’ appears to be do completely the wrong thing in any critical situation, regularly risking the lives law enforcement agents and her own family while facilitating the escape of the bad guys. She’s supposed to be the best undercover agent in the global business of financial shenanigans. Instead she’s a maverick liability whose inability to follow procedures or adhere to the most basic forms of tradecraft somehow mysteriously sees her promoted to the level of FBI Deputy Director.
Obviously, Paul Eddy can craft an engaging tale because he’s got me frothing about how ludicrous this situation is. There’s certainly an excellent segment of this story where Grace confronts her opposite number, a female assassin, and we learn the sniper’s compelling back story. The hitwoman is a far more competent operative, to be honest. But overall I spent most of this book fuming about the daft behaviour of its protagonist, and I will avoid picking up any others in this series.
4/10 (RH)

BLUE MOON by Lee Child
I am surrounded by bookish friends who tell me, every time a new Lee Child work appears, that it’s dull, repetitive, uninteresting and nothing like as good as his earlier work. So I approach my fresh read with minor dread. However, so far and consistently, my pals are wrong. As indeed they were this time. This is a cracker – a classic Reacher tale, rammed with considered action, improbable feats of logic and impossible physical feats, too. Exactly as it’s supposed to be.
Often copied but never bettered, Lee Child’s hero goes marching on, despite admitting here and there that he’s growing old. An unexpected luxury…
Five Stars. FW 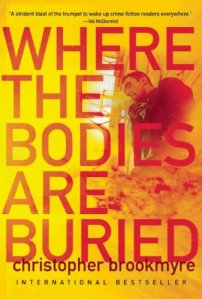 WHERE THE BODIES ARE BURIED by Chris Brookmyre
I couldn’t get to grips with Brookmyre’s earlier thrillers which were saturated with outright aggression, written in convincing but near incomprehensible dialect. This is the first of a more mainstream series however, and it’s far more accessible. The author still pulls few punches in portraying the nasty backstreets where Glasgow’s gangs brawl and bleed, but the sense of place now grounds the story – rather than distancing me from it.
The two women protagonists are also unusually well-rounded. The police detective isn’t simply a bloke with mammary glands glued on; she’s a three-dimensional and very definitely female person. Her younger counterpart, Justine the trainee private investigator, could so easily have been a feeble damsel in distress, but she’s also given a layered personality with a core of something stronger than we initially suspect.
Plus there’s a splendid plot; a decades old disappearance which triggers an outbreak of bloody violence, more missing persons and gangland violence. Great stuff. I’ll try the next one. 8/10 (RH)

DEEP DARK NIGHT by Steph Broadribb
A game of two halves, this action-thriller starts slow with a skilful build-up to a high stakes poker game. Bounty hunter Lori attempts to entrap a mobster boss in an off-the-books FBI covert op, and the early cat-and-mouse manoeuvers really ratchet up the tension. The second half switches to a pell-mell chase through a city blackout, jump-cutting between two parallel sequences of cliffhanger chapters with an unknown puppetmaster snipping the strings.
The eventual who / how / why revelations seemed wildly implausible but this is one of those books which is less about credible motivation and opportunity, and all about the breathless chase and rapid reversals of fortune. It’s the fourth in the series but the situation was neatly outlined and easy to absorb, so no need to have read the previous ones if you want to start here.
7/10 (RH)

FIRST CONTRACT by Frank Westworth
What I really liked about this book was the writing style. Two things really stood out to me: short sentences when long ones are not necessary, and realistic, well-written dialogue. This book does both very well, and I assume that will be true for all of the author’s work. An interesting story is one thing, but style is something else. A good style can raise everyone’s work. I will definitely add more of Westworth’s books to my future reading list.
Five Stars (Tony Ryan) 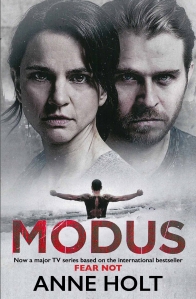 MODUS by Anne Holt
Another of Ms Holt’s Vik / Stubo series, and the weakest so far. The plot is gradual, the characters decreasingly credible and the author’s own tastes and interests dictate what happens – as is often the case. Everything revolves – slowly – around an improbably tangled series of murders, while their inevitable solution involves the unusual daughter of Ms Vik. I didn’t enjoy that much, to be honest. The endless detailing of an unusual child and her mother’s obsessive protection – however justified were this the real world – gets in the way of the plot. As did the fashionable but equally tiresome gender politics. I’ve already bought the last in the series, but I’m in no hurry to read it.
Three Stars (FW)