We have THREE ebook editions to give away this week, to help celebrate the recent publication of Matt Hilton’s new thriller, Marked For Death. This sees the return of Joe Hunter, an ex-military hard man who metes out justice on the backstreets of America.

Hunter should be on a routine assignment providing security for an elite event in Miami. But… heck, you guess it: things rapidly go wrong. Hunter is initially drawn into what appears to be a domestic altercation, coming to the rescue of a modern-day damsel in distress. When he crosses the mysterious Mikhail however, he discovers something altogether more sinister. Hunter soon has a personal score to settle, when his pals are attacked with deadly force…

If you like the sound of Marked For Death, take a look at the opening chapter. It’s a great way to meet Joe Hunter himself. Better yet – why not try the previous book in the Hunter series? 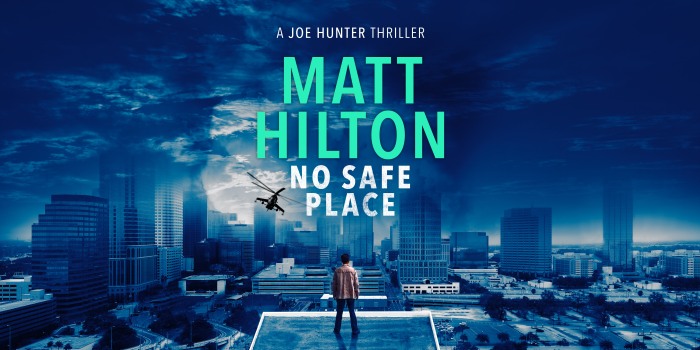 In No Safe Place, Hunter takes on what might be a lost cause. Andrew Clayton is the obvious suspect when his wife is murdered. The police think they’ve found their man, and public outrage soon develops into vandalism and threats of violence. Clayton needs someone to protect his young son – and Joe Hunter takes on the case. Who’s threatening Clayton and the boy? And why won’t Clayton reveal what he knows about his wife’s murder? Staying silent puts his son directly into the murderer’s sights – so it’s up to Hunter to catch this killer…

Reviewers reckon No Safe Place is ‘another rollercoaster ride from Matt Hilton’, and ‘a real good kick-ass read.’ So here’s your chance to try it for yourself – enter our giveaway and you could start September in sure-fire style!

ABOUT THE AUTHOR
Matt Hilton quit his career as a police officer with Cumbria Constabulary to pursue his love of writing tight, cinematic American-style thrillers. He’s the author of the Joe Hunter thriller series, has short stories in a number of collections, and Joe Hunter also features in a series of short stories and ebook originals. Matt also writes horror/action novels and has been writing since he was a small child. He’s an avid reader of crime, horror and thriller books, all of which inspire his writing style.

Matt is a high-ranking martial artist, fourth-Dan blackbelt and coach in Ju-Jitsu. He’s been a cop, a detective and a private security specialist, all of which lend an authenticity to the action scenes in his books. Although seen as crime thrillers, Matt’s Joe Hunter series combine elements from many genres. Matt is a huge fan of the pulp masters, and hopes to emulate their fast pace and derring-do. Matt is the first to say that his books will never win a literary prize, but they’re not intended to: they’re there for pure entertainment.
Amazon page
Goodreads page
Author site

SMALL PRINT: we have five ebooks editions of No Safe Place by Matt Hilton to give away. Just hop over to Facebook and like / share / comment on the Joe Hunter giveaway post (or if you don’t do Facebook, you can send your entry by email).
Competition open worldwide. Closing date for entries is midnight GMT 31st August 2017. Winners will be selected at random from all entries. Prizes will be awarded as mobi or other e-reader files. Runner-up prizes may be offered. No alternative prizes available

Looking for more gritty thrillers? Seek out The Stoner Stories at Amazon